In the early 20th century, only a handful of torbanists still played on. After the Revolution it altogether fell out of favor with the new order. Because of it's associations with the upper classes/nobility/gentry, with Hetman Ivan Mazepa (whom Soviet era Scholars treat as a traitor for siding with the Swedes), and the "foreign" Polish nobility, it was discouraged as an instrument of insufficiently "proletarian" provenance.

Vasyl' Shevchenko was of the last remaining torbanists (born in Kuban regionm he worked as a stagehand at the Bolshoi Theater, and later was a schoolteacher). His group in Moscow ca.1912 included another torbanist whose name is now unknown. Vasyl' Shevchenko's own torban made by luthier Krasnoshchekov is preserved at the Glinka museum. 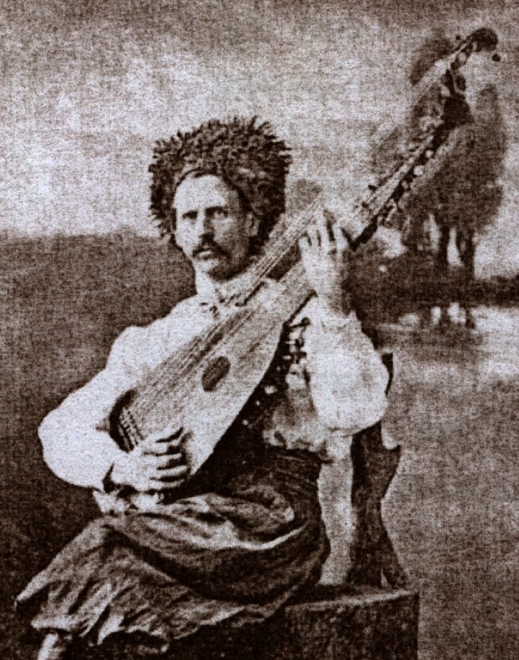 An unknown torbanist in a postcard from 1908 (note the lutenistic playing position): 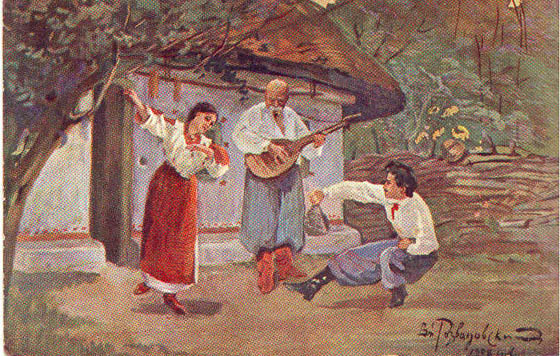 Another postcard from the same era, depicting the same trio (the instrument seems to have lost the upper pegbox, unless the previous illustration shows it restored. Note the lutenistic playing position): 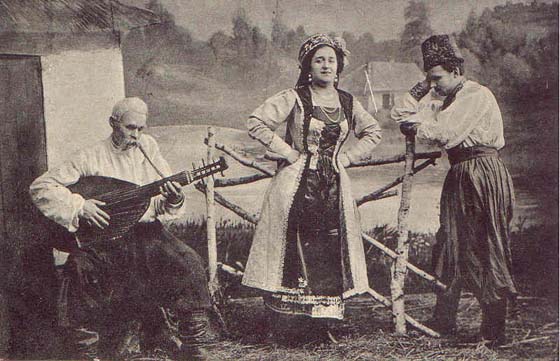 During this period many old torbans seem to have found new uses as banduras, frets removed, using bandura technique, as fewer and fewer people knew what torbans were, and what techniques were appropriate on them.

The last known TORBAN virtuoso during the first half of the 20th Century was Vassily Svarog, also known as a guitarist-composer as well as a major realist painter. Here he is pictured in a 1911 self-portrait with his TORBAN (Note the presence of glued bodyfrets! unusual on Torbans). 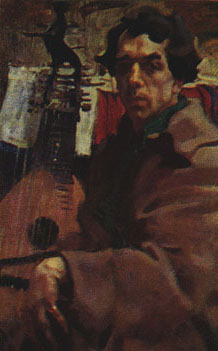 In recent times attempts have been made to revive the original fretted kobza and the torban. In the beginning this has met with only limited success, but there are a few individuals that are working to preserve the authentic kobza tradition. They call themselves Kobzarsky Tsekh (i.e. Kobzar Guild). It is led by Volodymyr Kushpet, Taras Kompanichenko, Eduard Drach inter alia.

Currently the only known Torbanists are 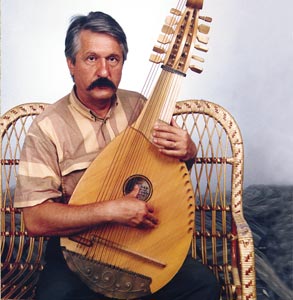 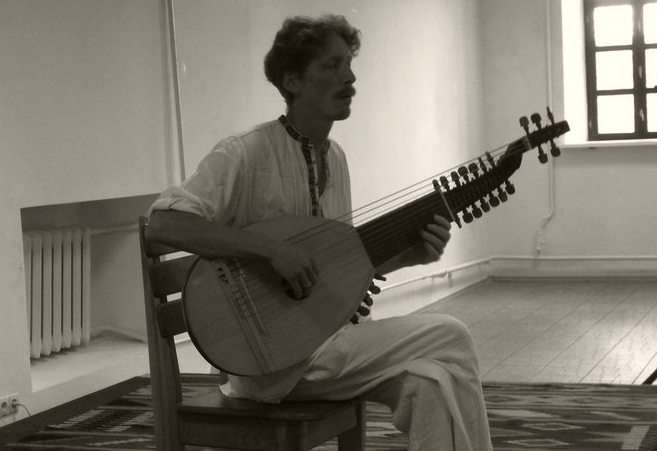 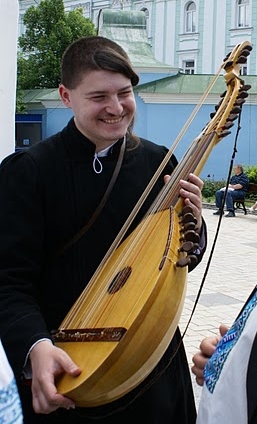 There are 3 luthiers in Ukraine that have begun to build torbans. They are - 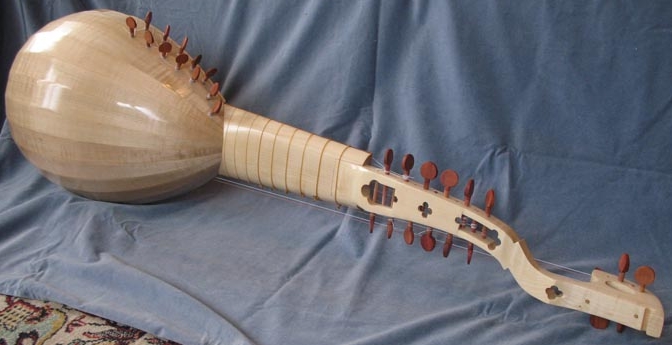 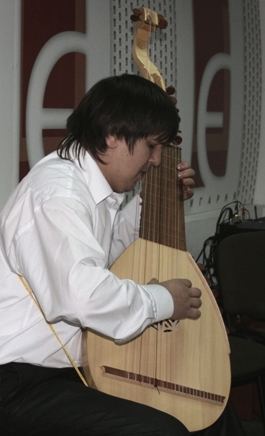 Eduard Drach is great singer and kobza player, as well as a composer and a poet. The CD that includes 3 of his finest performances is available at OBERIG Accociation, 32 Pushkinska St, Kiev, Ukraine. Tel: (38-044)235-5039, or directly from the ARTIST. A selection of his scores is found at - http://www.torban.org/pisni/drach.html.

Mykola Budnyk, fine singer, kobzar, musicologist and luthier died before reaching the age of 50 in 2001. Recordings of his performances of dumas with kobza accompaniment were collected on a CD that has been available in MP3 format.

To go to the his MP3 page (cyrillic required): click on the photo... 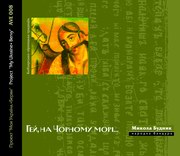 Taras Kompanichenko is now one of the most prominent members of the Kobzar Guild. His CD is available here (click on the photo): 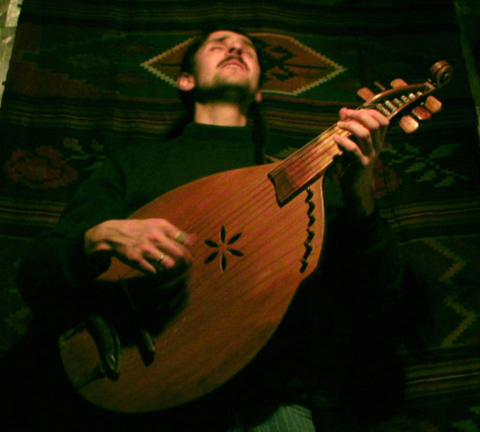 Marjana Sadovska is not a torbanist but a brilliant singer and musician (and not only of Ukrainian folk-songs) and a truly original ultra-avangarde artist (well worth knowing - click on her photo) or go to http://www.borderlandmusic.de: 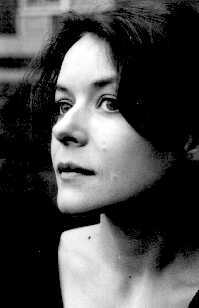 This writer has his own web-site. Click on the portrait: 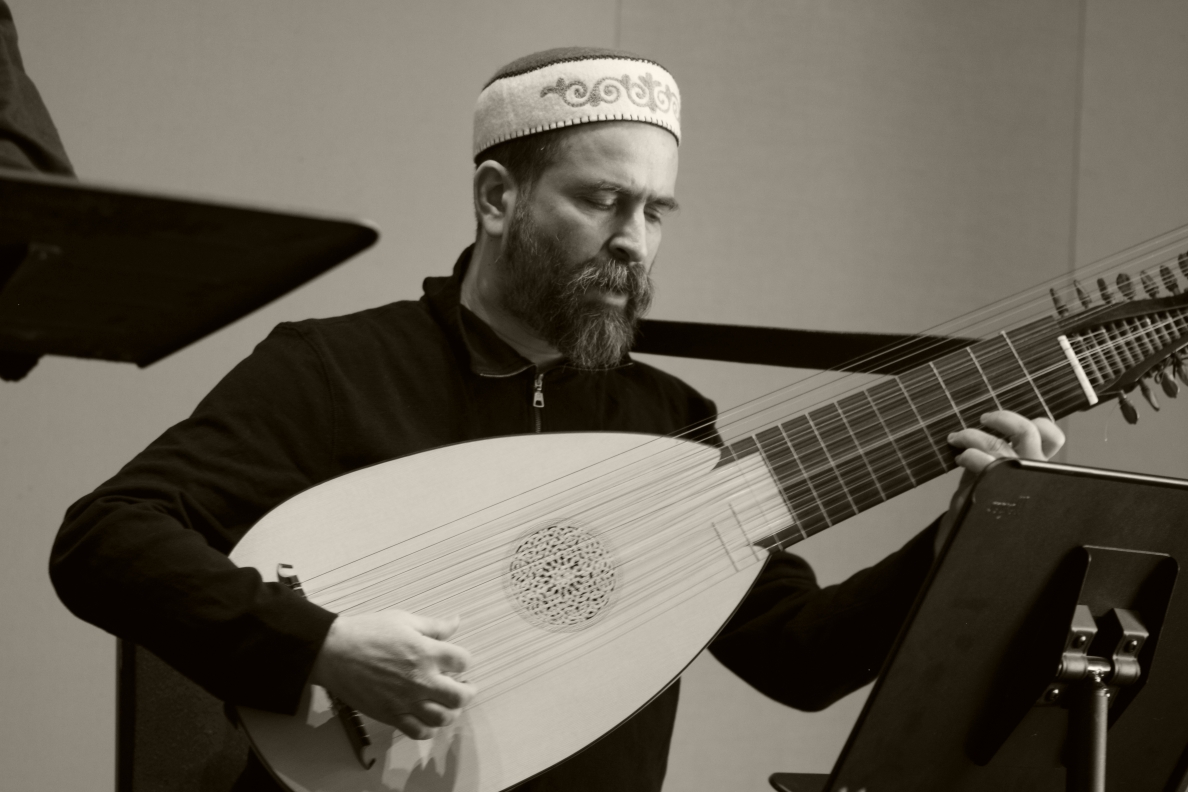