The TORBAN (or Teorban) is a uniquely Eastern-European instument that combines the features of the Baroque Lute and the Zither. In addition to a normal set of strings on the neck, it has a set of additional unfrettable strings in both the treble and the bass register.

The term TORBAN(Teorban) predates the existence of the instrument itself--it previously denoted any European theorbo (or lute) that found its way into Poland & Ukraine. The term when applied to the torban proper could be either an adaptation of THEORBO, or a contraction of TEORbo+BANdura. Its precedents were earlier lute-zither hybrid instruments (at least 3 are known), which include Francesco Landini's "serena serenarum", Tiffenbrucker's "polyphant" and the anonymous Kobza in the Krakow Mus..

The invention of the Torban may be attributed to a specific individual. Sometime between 1736-1740, a Polish Paulite monk from Jasna Gora named Tuliglowski invented an instrument "per modi bandura aut teorban efformati"; he named his instrument "tuli di gambe" [sic!]. Tulignowski was rewarded for a performance on his invented instrument by the Emperor Charled VI in Vienna, where Tuliglowski went in the retinue of Prince Lubomirski. To date, no information on Tuliglowski and his "tuli di gambe" has been found beyond one document found by Polish musocologist Marcin Ludwicki.

The earliest Torbans identified to date are the ones preserved in museums in Lviv, Pereyaslav, Posnan and St.Petersburg (some Torbans perished during the 2nd World War). Extant Torbans greatly outnumber banduras of the same era! There are only 6 surviving banduras dating from before 1900, and about 40 torbans. There is only one surviving specimen of Kobza-Bandura (the Torban's predecessor), in Krakow.

Torbans were lightly built, like other lutes, with some structural modifications required by the greater number of strings (including a wooden rod under the soundboard). Most were made by anonymous makers, very few have labels, but three luthiers are known by name. While the area of manufacture was wide, from Danzig to Moscow, most instruments came from the Western Ukraine. The first torbans were likely to have been conversions of lutes or angeliques. They gradually--although not completely--become fretless by the time of instrument's extinction: somewhere between 1917 and 1920. The torban had staggering organological variety; no two surviving intruments are alike. On some torbans, frets were either inlaid or tied on the neck, while others remained fretless. The first four treble courses were single, and the rest double; bass courses could be either single or double. The tuning was based on the F-major triad (similar to the Weichenberger major tuning, but a third higher). The A's could be dropped to Ab for music in minor keys--torban music seems to have been limited to the keys of F major, C major, F minor, and C minor.

Torbans became common since the middle of the 18th century, as many Polish and Russian aristocrats kept Ukrainian torban players in their service. Only a handful of these players are known by name: Andreas Razumovsky (Beethoven's patron), poet-composer Tomasz Padurra, The Vidort family: Cajetan, Gregor and Franz Vidort, Ivan Aleksandrov, Vasyl Shevchenko, Vassily Svarog and a few others of whom there is some anecdotal evidence.

The playing technique comprised many positions, including the lute position, the lap-zither position, and the vertical bandura position.There is almost no identifiable torban music extant--it seems to have been largely an oral tradition--but a few pieces were collected by ethnomusicologists in the late 19th century. One notable composer of songs with torban accompaniment was Tomasz Padurra, but he published them in all-purpose notation, playable on any instrument. 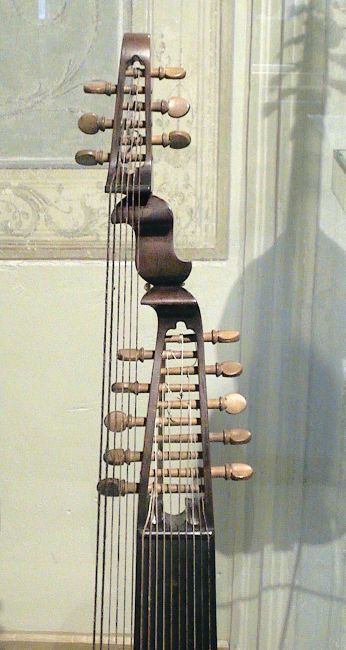 ***Proceed to the TORBAN ILLUSTRATIONS page.